Love letter to my period

Most affairs come with some strings attached, but our relationship with period tends to come with pain, shame and occasional stain. In this guest post #RealMooncupUser, Comedian, Podcaster and The Pink Protest campaigner Grace Campbell looks back on her menstrual highs and lows and decides it’s time to show her period some love.

Late to the period party

I hate being late to things. My whole life, I’ve never been late by choice. I’m early to everything, even a first date, or a colonoscopy. So, you can imagine how annoyed I was that I was late to the period party. Aged 13, everyone had had their first periods, and I was still a mere, bloodless child. All of my period friends were part of this conversation that I was desperate to be part of, but I couldn’t. They spoke about it like it was an episode of EastEnders that I hadn’t watched.

When my period finally came, I told the whole world. I was gassed. It happened when I was 14, and I was about to go on stage in my school production of Much Ado About Nothing. I was playing Beatrice, it was the role of a lifetime. For my role of Beatrice, which I had been very method for, speaking in ‘doths’ and ‘thous’ for weeks in the build up, I was wearing a white dress. My blood leaked onto the dress, but the show went on, and I paraded my first period, on stage, for all of the parents to see.

The show was epic, of course, I was a woman with a period now, I could achieve anything I put my mind to. I went home and looked at the blood. It wasn’t the red I had been told it would be. It was clotty, like jam that had been left in the sun for too long. On first impressions, I liked my period. She was cute, and clearly loved making a scene, just like me.

Over time, my friends and I absorbed the shame from the people around us. Shame that made us feel we had to hide our periods. We went from looking at our blood proudly, to thinking we had a malfunction in our bodies.

I thought this was bullshit. Like all of the other things I was made to feel ashamed of. Wanking. Fanny Farts. Actual Farts. Why do we think our bodily functions are abnormal?

A few years later, I was working in one of my first and last jobs in an office. On my desk there were two girls and two men. I received an email from one of the girls:
“Hey, do you have a tampon?”

She was sitting right next to me, literally she could have just leaned over and asked me for a tampon. What did she think would happen if she said it aloud? It made me sad. Mainly because if the men on that table had periods, they’d be shouting out about it all day. They’d play darts with tampons, and ping pong with Mooncups. There’d be menstrual products in a bowl in the middle of the table, like a box of in-equality street.

On Wednesdays we wear pink and protest

In the last few years, I’ve been part of an amazing change in the conversation around periods. I started the Pink Protest, an activist collective for feminists, and we worked closely on the #freeperiods campaign, which was campaigning to end period poverty in the UK (1 in 10 girls doesn’t have access to menstrual products at some point in their lives.) For this campaign we organized a protest, and thousands of teenage girls (and boys) turned up outside Downing Street, ready to shout about their periods.

I’ve become so proud of my period. The other day I came on my right before my yoga class and I decided to just carry on, and do yoga in front of 30 people, with a very loud period patch. I thought if anyone else is gonna shame me about my period, then the shame is theirs, not mine.

When it comes to period protection, the Mooncup is a menstrual cup that has really changed the game for me. It’s so cute, and clean, and easy to use, and it’s made me feel more connected with my body. It’s made me feel more in control of the process of shedding blood every month, in its special and gorgeous way. Before using a cup, I would shove tampons up there, never looking my vagina in the eye. But now I feel like me and my body are in this thing together.

The Mooncup makes me feel better about myself. It’s cheaper, more sustainable, and I never have to email someone whose sitting right next to me to ask them for a tampon. Oh, and for someone with that super plus extra extra plus heavy flow period, the Mooncup always delivers in supporting me.

I feel safe, secure, and like I’m early to the party again. 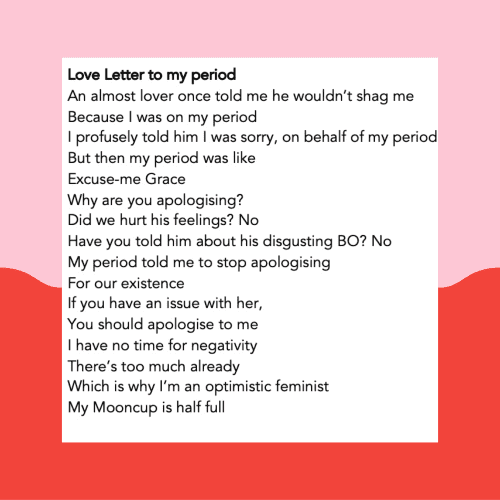 Amazing Disgrace: A Book About “Shame” by Grace Campbell was published by Hodder Studio RRP £14.99 and is available to order now.

Feel more connected with your body and own your period. Find out more about the Mooncup® and get yours here.

Read more on the Mooncup Blog:
What kind of person uses a Mooncup?!?
Top menstrual cup tips for a first-time Mooncup® user
“10 things I love about Mooncups!” by Lily Phillips
No Shame. Period.